The Rebellion Against Testing: A Q&A with Jesse Hagopian 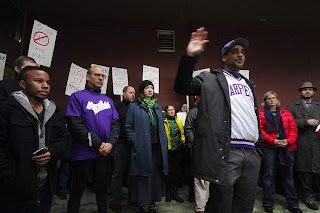 Jesse Hagopian is a leader in the group Social Equality Educators focused on social justice unionism within the Seattle Teachers Association (www.socialequalityeducators.org). He has written many articles on education reform. He co-wrote the chapter “Teachers’ Union and Social Justice” for the book Education and Capitalism Struggles for Learning and Liberation (www.haymarketbooks.org/pb/education-and-capitalism). Jesse teaches social studies in Seattle at Garfield High School and is one of many teachers boycotting the MAP Test. I had the opportunity to ask Jesse questions about the role of Social Equality Educators and the increased solidarity for the MAP Test Boycott. Jesse is pictured above with his right hand raised wearing a baseball hat at a MAP Test Boycott Rally.

Why are educators at Garfield High School boycotting the MAP test?

Quoted from Jesse’s Op-ed in The Seattle Times Why Garfield teachers boycotted the MAP test
http://seattletimes.com/html/opinion/2020158085_jessehagopianopedxml.html

“Seattle’s ninth- and 10th-grade students already take five state-required standardized tests, with 11th- and 12th-graders taking three. Seattle Public Schools staff admitted to a Garfield teacher the MAP test is not valid at the high-school level, because the margin of error is greater than expected gains.

In addition, teachers are forbidden to see contents of the MAP test so they can’t prepare students. Teachers who have looked over the shoulders of students taking the test can tell you that it asks questions students are not expected by state standards to learn until later grades.

This test especially hurts students receiving extra academic support — English-language learners and those enrolled in special education. These are the kids who lose the most each time they waste five hours on the test. Our computer labs are commandeered for weeks when the MAP is on, so students working on research projects can’t get near them. The students without home computers are hurt the most.

Students don’t take the MAP seriously because they know their scores don’t factor into their grades or graduation status. They approach it less seriously each time they take it, so their scores decline. Our district uses MAP scores in teacher evaluations, even though the MAP company recommends against using it to evaluate teacher effectiveness and it’s not mandated in our union contract.”