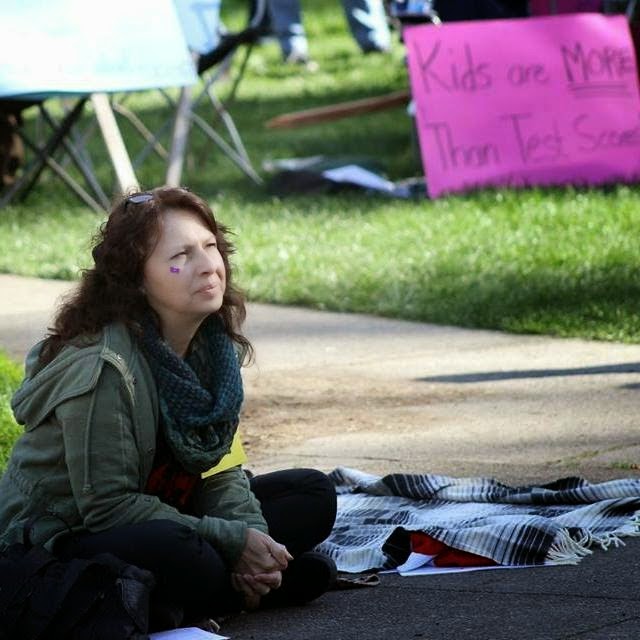 Last Tuesday I attended an event hosted by Oregon PTA at Gladstone High School. The event was billed as a parent information meeting about the Smarter Balanced Assessment (SBA) and guests from the Oregon Department of Education (ODE) were there, we were told, to explain to parents the difference between the previous state test and the new SBA. The presentation was delivered by Deputy Superintendent of Instruction Rob Saxton and Derek Brown, Director of Assessment for ODE.

It’s funny how sometimes things in your life seem to flow together. That day, I had been wrapping up a lesson in my sixth grade classroom on propaganda in advertising. Webster’s Dictionary defines propaganda as “ideas or statements that are often false or exaggerated and that are spread in order to help a cause, a political leader, a government, etc.” By the end of the evening, I felt like this would have been the perfect field trip for my students to see some of the various propaganda techniques that we had been learning about in class in action. Let’s see what examples of the techniques we learned about in class I can find in Dr. Saxton and Mr. Brown’s presentations:

Plain Folks: Dr. Saxton, of course, explained how we got the Common Core Standards and the tests necessary to make sure our children are learning them. It was just him and his buddies, regular guys just like him and you and me, other Chief State School Officers, who were at this meeting and they thought, “ ‘So you’re doin’ that work, and we’re doin’ that work… what would happen if we got together… to make sure we get a really good set of standards…? And that set of standards is called the Common Core State Standards… It is the only set of standards in Oregon that isn’t…created by Oregon educators. (They) have been created by other people across the nation, most educators, some not, some from industry some from college. I’m not saying that people… at the college level aren’t educators, just that they’re not K-12 educators, right?” Just us plain folks, mostly K-12 educators, right? Sandra Stotsky, one of the 6 out of 30 members of the Standards Validation Committee who refused to sign off on the standards tells it a little differently here.

Repetition: This is self explanatory. It is the repeated use of a brand name or message to sell a product. The phrase “higher level thinking skills” was used repeatedly when referring to the Common Core Standards (purported to impart them) and the Smarter Balanced Assessment (purported to assess them). The phrase “higher level thinking skills” was used four times in the first 8 minutes of the presentation and repeated throughout. Another oft repeated phrase: “college and career ready”. Apparently this is what you can tell if children are as early as third grade if only you adopt the Common Core Standards and the Smarter Balanced assessment. We were also told repeatedly that Common Core Standards are “higher standards” than our previous standards. And thus we move to:

Glittering Generalities: This propaganda technique uses emotionally appealing words to describe a product or idea, but no evidence is given to support it. Both a father in attendance and I asked Dr. Saxton what the evidence was that Common Core are “higher standards”. The father, who stated that he held an engineering degree, said he would like to be directed to some sort of documentation that these standards were indeed “higher”. Another parent in attendance, who stated that he was an educational researcher, asked questions about evidence that the test had been validated using any sort of accepted standards for validation. Were these gentlemen and I directed to any evidence? No. Glittering generalities about “high standards” were all we got.

Bandwagon: This is an appeal to join the crowd in order to be on the winning side. We were told how SO many states (I believe 28) were jumping on the Smarter Balanced bandwagon, and told (repeatedly) how great it will be when we all have the same standards and the same test and we can all compare each other with each other across districts and cities and states. You wouldn’t want your child left behind, would you?

The Big Lie: This is repeated distortion of the truth on a grand scale, especially for propaganda purposes, like when they say that all this education “reform” is going to erase the effects of poverty. I didn’t go over this one with my class, but maybe I should have, because I’m having trouble sorting out all the lies. There were particular portions of this presentation that have me greatly disturbed. Derek Brown, Director of Assessment at ODE, presented before Dr. Saxton. Saxton took over when Mr. Brown appeared to get to a point of discomfort in answering a question that was asked about the developmental appropriateness of SBA. Dr. Saxton ignored the statement made by the questioner that not one Early Childhood expert was part of the development of the Common Core Standards as well as ignoring the reference to a recent report on the harm that can result from trying to force children to learn to read by the end of kindergarten. (“A friend of mine who’s a superintendent now was talking about…(how) we believed that typing wasn’t developmentally appropriate until 10th grade…the brain couldn’t really make the connections to make that happen… but I was at one of my schools today and watched 5th graders typing and some of them were at 65 words a minute. And sort of I thought, wow, I never thought I would see the day when we sort of blew through this thing about what’s developmentally appropriate, what are kids really capable of.”) Neither presenter seemed overly troubled about the predicted 8 hour average that the battery of assessments will take a third grader to complete, stating that this test would take the same amount of time as OAKS (which might be true only if a student were one of the unfortunate who was required to take OAKS on all 3 possible attempts to increase her score). That’s probably not The Big Lie. That’s closer to a little white lie.

Mr. Brown was asked about not only the developmental appropriateness of the SBA, but was also asked, by me, about answers that students type in (I’m assuming at a rate of 65 words per minute in 5th grade, if Dr. Saxton is to be believed) and how those answers would be scored, since a few years back we dropped the Oregon 4th grade writing assessment which was hand scored by Oregon teachers. I told him about some links a friend had sent me where people were being hired from places like Craigslist to score student tests for as little as $10-$12 dollars an hour, with any four year degree being the main requirement. This is not a good thing.  He told me that he was unaware of any hiring being done off Craigslist, that ODE had contracted with a company called DRC (Data Recognition Corporation) and that all scorers would be well trained but would work “somewhere in the midwest” until ODE could find scorers “closer to home”. (By the way, I am a trained educator, live only 2 miles from my classroom and score student work every day for zero dollars above my regular salary.)  I then asked him specifically if those scorers would all be educators. He answered, “Yes.” I’m here to tell you that unless DRC is doing a special “educators only for Oregon” deal, that answer does not appear to be correct. They are advertising here for scorers. This is their recruiting flyer for jobs, some in the midwest, even. That probably isn’t The Big Lie either. I suspect that’s just a plain, old lie. (Thank you to Hyung Nam blogging at People Power for finding this information.)

What seemed to me to be the biggest lie came early in the presentation. I don’t know that this was actually an example of using The Big Lie as a propaganda tool, or more like just a big lie. At the beginning of the presentation, Mr. Brown showed attendees a slide show. In that slide show, he showed us a 5th grade “practice test item”, read it aloud, and then said “students would read that kind of stimuli and get an opportunity to answer a couple of short questions”.  He then read one of the questions that followed aloud (which did not match what he just read in the passage) and mentioned that “on this one, we just took a snippet from the passage the student would read, so that’s not actually the entire stimuli” and said something to the effect that you could just tell by the way that the question was worded that you would have to explain where your thinking is coming from… “and a student would probably have 3 or 4 short responses based on a passage like that”.

There was so much that was wrong with what was said that night, it’s nearly impossible to include it all here. You can see much more at the links to videos found below the SBA practice passage.  When you watch the video of the slideshow, pay attention to the question the woman asks about why she would subject her son to an 8 hour test as a junior when he had already shown the Essential Skills for graduation by passing the PSAT. The answer was basically about how we really need to be able to get good data to do data comparison to see which school is good and which is better and which school is really, really bad. This is the point at which I heard the woman next to me mutter under her breath, “So, it’s a pissing match.” Yes. And our kids are data donors caught in the middle.

Judge for yourself: The Big Lie, or just a big lie?

(See below the ODE slide followed by the actual entire passage from the SBAC practice site. Please note: there are plenty of multiple choice questions.)

Here is the slide presented by ODE: 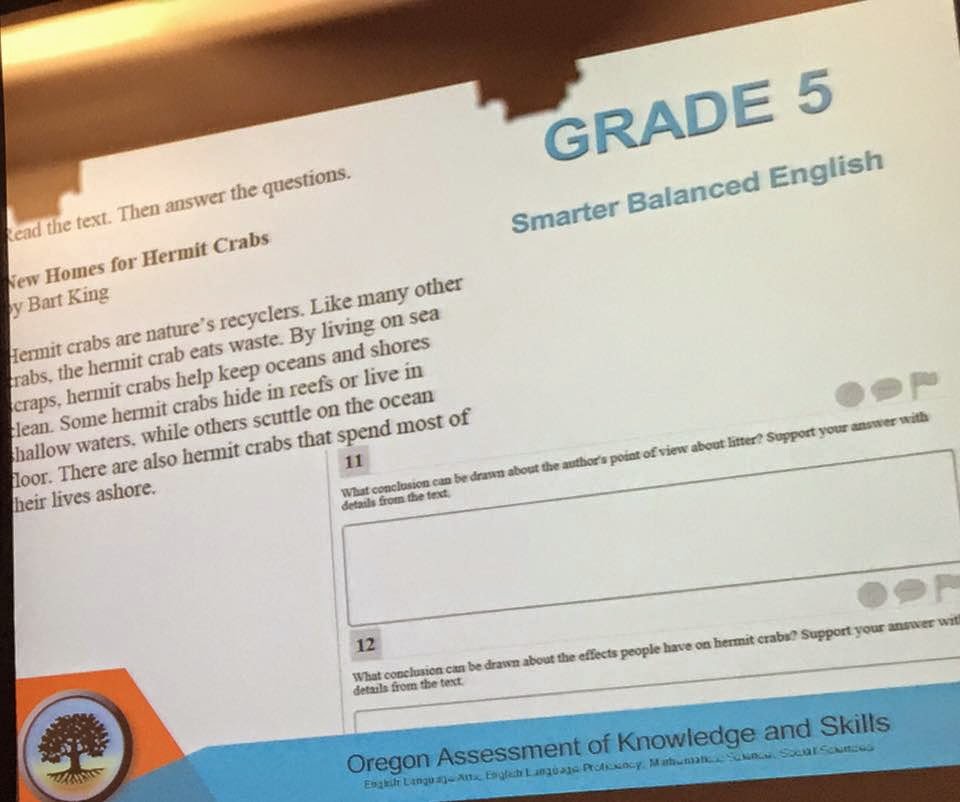 Here is the actual passage and questions from the SBAC practice site in a series of screen shots taken the night of the presentation. 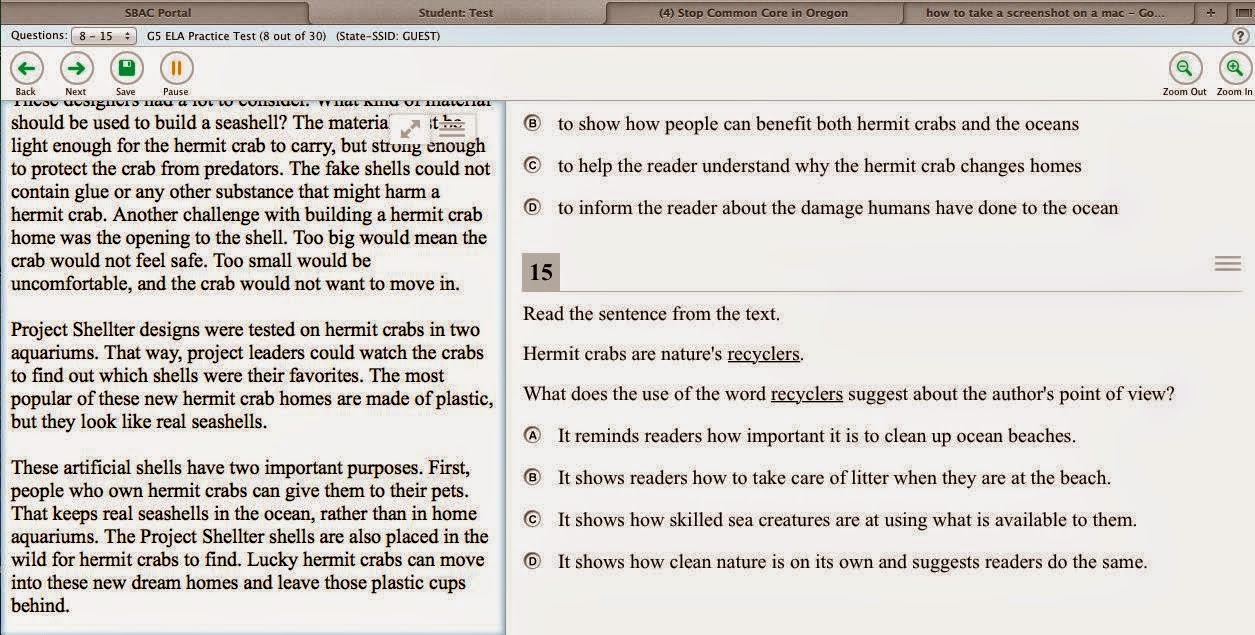 Isn’t it about time Oregon had an honest discussion about these standards and assessments?