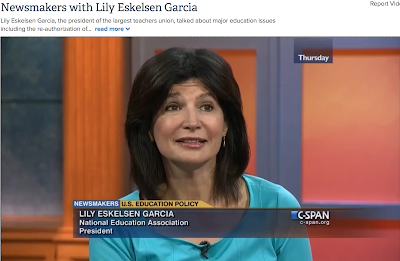 I awoke this morning to a C-SPAN rerun of "Newsmakers with Lily Eskelsen Garcia" in which one of interviewers was Emily DeRuy, who covers education for National Journal's Next America project. DeRuy previously reported on politics and education for Fusion, the ABC News-Univision joint venture.

Ms. DeRuy almost immediately made the hair on the back of my neck stand up both in her questions to Eskelsen, and in the post-interview analysis where she pretty much trashed NEA for making common cause with the Republicans on accountability and for "breaking with the current administration." She essentially said NEA was now a paper tiger.  When her fellow interviewer from EdWeek noted that he would be cautious about that view, she cited declining union membership and was essentially completely dismissive.

So I just had to check DeRuy out and in that process, I came across some interesting work of hers at NationalJournal.com: "Charter Schools Are Especially Good for ELL Students" and
"Is Wall Street Starting to Recruit in Pre-K? - Proponents of early childhood education are willing to follow the money" [Links not working when we posted this - Ed.]

That "Wall Street " article really got my attention because I believe that:

Be that as it may, the passage of HB3380 set off a major celebration among the philanthropic "in" crowd, as per this article from The Children's Institute of Portland.

SO as I end my thoughtful meanderings, and get serious about my breakfast, I am increasingly worried about just what mischief the entrenched ECC gang will bring to our door going forward. While our "victories" in opting out, helping to hand Kitzhaber his hat, and (hopefully) at least slowing the crazy testing down have been really fun, I think we have just scratched the surface of the powers out there working constantly to "reform" public education into their own privatized and elite vision. We need to keep looking ahead!
Posted by Oregon Save Our Schools at 9:10 PM No comments: