ODE Leads With Fear: Districts/Schools Fail to Honor Intent of Opt Out Bill 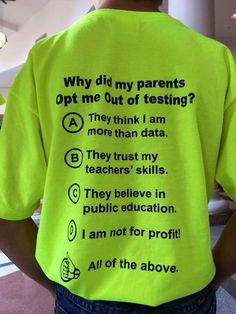 It seemed so simple.  The problem?  For some reason, since the implementation of SBAC, parents were finding it hard to opt out of high-stakes testing. As more parents protested the new assessments by opting out,  districts made up their own interpretation of the rules for opting out, some even going so far as to question parents' request for religious exemption.

The solution?  Legislators passed HB 2655 to provide parents and students with clear and consistent testing and opt out information across the state.

What could go wrong?

First of all, the Oregon Department of Education asked for input on their first draft of the opt out form.  ODE received lots of negative feedback and suggestions to make changes.  Why?  The form was basically an advertisement for how supposedly awesome and valuable the Smarter Balanced test is.  Not only was the form misleading and biased, but it also threw in a guilt trip for good measure, with a statement at the bottom.  It was not well received.

We started to wonder: Why is Dr. Salam Noor, Deputy Superintendent of Public Instruction at ODE,  pushing for a test that parents and students don't want?  Enter stage left: magic number 95--percent that is.  Ninety-five is the percent of children the United States Department of Education is demanding are tested--or else.  Or else what?  Our state maybe loses some funding? Gets a lower rating?

Big deal.  We are already losing funding when dollars go into buying, supporting, and using this test.  We lose quality schools when we don't authentically assess what really matters.  What really matters is the dialogue, work, and relationship in learning that goes on between a teacher, their student, and the parent.

No one in charge at the state level seems to have the spine to stand up to the USDOE and tell them their test is a problem and that we can assess our students just fine without threats and strings attached. Instead, ODE is all about compliance rather than supporting students, parents, and teachers.

But only for state testing. When it comes to many other types of programs and curriculum, there has never been a question about parents' right to opt out. Why is it that parents have been able to opt out of programs like our state's Healthy Teen Survey, sex education, other school curriculum, or even immunizations with ease, but when it comes to the SBAC, ODE says no dice.  What makes this test supersede the judgement of a parent?

Which brings us to gate keeping--controlling and interpreting the procedures to benefit those in charge.

And some districts are indeed gate keeping despite the letter Oregon Save Our Schools sent to almost every school board chair and superintendent in the state.  Why?  Who are they guided by?

The Oregon Department of Education.

ODE has a communications or messaging toolkit for the SBAC and opt out. They even have a link on their page to testing propaganda by Stand for Children, a education deform group that has received millions of dollars from the Gates Foundation and other wealthy donors. During John Kitzhaber's tenure as governor, Stand for Children was his "go to" source for educational policy advice and was thus able to gain wide influence within ODE. There are also a number of people in charge of programs who, in spite of the new power given to states to make changes by ESSA, are very comfortable with the way things are.

These may be some of the reasons why ODE isn't very objective.

In any case, districts are taking their marching orders from ODE, and when Dr. Salam Noor writes a letter encouraging districts to minimize the number of opt outs so as to not jeopardize the magic 95 percent participation number, then things get even more interesting.

The rules may be being followed, but just barely.

So let's take a look at the law again.

First of all, here is how a parent or student opts out and what needs to be on the form, Section 3 and 4:

Then here is what is supposed to be sent to inform parents at the beginning of the school year:

Finally, sections 6, which makes one think that closer to the testing window, which is more relevant and timely for parent and students,  districts will send out more clear and specific information about what to expect with summative SBAC testing so parents and/or students can then make a more informed choice to take the test or opt out.

The current reality of the implementation of this bill doesn't really honor its intent which was created out of a need to help parents and families make a choice that was best for them.  Instead it appears that the Oregon Department of Education is still trying to make it difficult for parents to opt their children out. It just may be less overt.

Now some districts across our state have links to opt out information up front on their website, which is great.

However, there are still concerns:  Some districts are interpreting "providing" by just throwing a link to information or the opt out form on their web page somewhere and hoping parents won't find it; some districts have the link, but also have all the propaganda from ODE supporting their claims that the SBAC is so fantabulous; some are changing the wording from Opt Out to Parent Exemption, some districts are refusing to print out opt out forms and have them out in the open in school offices because if they aren't seen, they aren't likely to be used--however, this is an equity issue for families without computers and printers; some aren't providing the specific information for section 6, some parents are being called by their district and asked if they are really sure they want to opt out, and some districts are expecting parents to meet with the principal to discuss their opt out choice, even though there is nothing in the law requiring parents to do this. These are just some of the stories we are hearing.

So the question is:  Why are some school districts trying to hide opt out?  The answer leads back to ODE which is leading with fear and threats because they too have been led by fear and threats from the US Department of Education.

We keep hearing that the days of control by the federal government are gone, that states have the right to create their own systems of accountability and assessment. We must seize this opportunity.   This is not the time for bureaucrats who are entrenched and invested in the current system to take charge. ESSA Assessment committees and groups tasked with creating a better system are being formed now by Oregon Department of Education while Oregon teachers continue the work begun in partnership with former Chief Education Officer Nancy Golden towards creating a different way of assessing student learning. We must demand that our governor, who is also the Superintendent of Public Instruction, follow the will of the people and get rid of an assessment that parents, students, and teachers just don't want by calling for a moratorium on the SBAC test and ignoring the threats of the feds.

In the meantime, ODE should be open about the opt out process and instruct school districts to do the same.

If you have a story of you or your child being harassed by district personnel for exercising their opt out rights, please contact us at OregonSOSinfo@gmail.com or find us on Facebook at Oregon SOS.
Posted by Oregon SOS at 9:48 PM