Can Children Be "Too Young To Test"?

For the first decade after the No Child Left Behind Act passed in 2001  --  putting into high gear the testing-based model of education  --  almost all standardized testing took place in grades 3-8 and 11.  Little children were the only ones spared being subjected to the data-driven “business model” approach to learning, with its fixed testing targets and its multitude of accompanying charts and graphs.

No more.  Little children have now caught up with their older siblings in the testing derby, on track to join them in taking over 110 standardized tests by the end of high school. Yes, 110. Teachers in pre-kindergarten through grade two have now joined their teaching colleagues in the older grades in the pressure cooker to produce “accountability” data to match predetermined benchmarks.  Little children are now joining their older siblings in experiencing the sidelining of art, music, creative play and other non-tested curriculum.  They too are now spending more and more of their day in “seat time”, focused on tested subjects.  They too are now being repeatedly “tested, sorted and tracked”.

Oregonians have an opportunity to change things in a good way.  We have the chance to say “No” to the developmentally-inappropriate and harmful practice of testing-sorting-tracking little children.  We can say “No” to the drive to minimize their other important qualities, such as creativity, divergent thinking, and problem-solving.

One way to change things is for all of us to tell our legislators to support the “Too Young to Test” bill, (HB 2318), that has been introduced by Representative John Lively (D- Springfield).  It would prohibit the state government and local districts from standardized testing little children from pre-kindergarten through grade two.  It is modeled on legislation in New York, New Jersey and Illinois.  It would allow teachers to make their own professional decisions about which assessments to administer.

The second way is for parents to “Just Say No” to every form of standardized testing that they can.  This is where the ultimate power is:  If parents say, “No more” --  by opting their children out  --  the testing juggernaut will begin to collapse.  We could then join much of the rest of the world in giving a few, well-constructed, classroom-based assessments – and save our kids from harm, save our teachers and principals from dispirited burnout and save taxpayers tens of millions of dollars a year.

What Have We Got to Lose?

After all, what have Oregon parents, students and taxpayers gotten for the hundreds of millions of dollars we have spent on standardized testing for the past 20 years?  Is the dropout rate better?  Has the “achievement gap” among ethnic groups and economic classes improved?  Is teacher burn-out and turnover up or down?  Are students more engaged with their own learning?

Is this really the best we can do for our children?

There is no ethical or curricular justification for repeatedly standardized testing very young children - or any of our children. Let young children experience the joy of learning and the thrill of making, doing, exploring, and play. They are indeed “Too Young to Test”.  Do two things for our little ones:  Support HB 2318 and encourage your friends to Opt-Out.

Roscoe Caron and Larry Lewin are retired Eugene School District middle school teachers and members of the Community Alliance for Public Educatin (CAPE).  Pat and Jan Eck are retired elementary educators and founders of Angry Grandparents Against High Stakes Testing (AGAHST).  All are members of the Oregon Public Education Network (OPEN), which defends public education. Check out their websites:  oregoncape.org. and orpublicednetwork.org  This article originally appeared in Eugene Weekly and was republished here with permission of the authors. 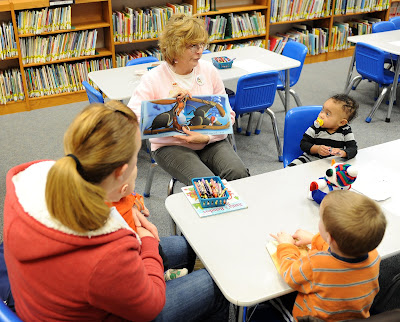 Posted by Oregon Save Our Schools at 7:29 AM No comments:

The Oregonian recently published an editorial suggesting that parents who opposed high stakes standardized tests are fighting against the community good. But I was disappointed by the editorial’s logic and lack of respect for the problem of relying on SBAC test data.
For background, I’m a trained and experienced applied mathematician and have used data to manage human oriented programs for 25 years (advertising, marketing, etc). In my role, I’ve had to rely on data to deliver $1B in revenue for clients and my clients have included a large number of the Fortune 100 companies.

The error is that the editorial presumes that SBAC tests are “good data”. There’s little evidence to support this.

Just a few brief points about the data SBAC produces:

Tests of this sort are able to evaluate (at most) only about half of what we need kids to learn in any subject area. Consider writing.

ALL subject areas (tested or not) are generally about half of what we need students to learn at school.
The SBAC tested subjects only reflect about 25% of what we need schools to deliver. Given that only about 1/2 of the subject matter can be tests, this means:

SBAC tests are neither good data nor useful data. They are simply data and they fill vast computers in ways that allow silly little superficial reports to be sent home. Administrators probably love the data - because administrators don’t demand data be good - only that it be present (this observation is about every industry including, I expect, the newspaper business).

The role that your newspaper and the Oregon Department of Education give them in discussion misleads the public into believing they are highly meaningful.

My bottom line is we are in a position where society (and PPS administrators) WISH there was an objective way to rely on data to evaluate schools. There is not that opportunity. Unfortunately, PPS has chosen an Orwellian claim that bad data is good.

There are other ways to evaluate schools. And parents, despite complaints you might hear, do know how well their kids are doing. But parenting is difficult because in middle school years, there’s no way to be certain that the hormone driven mess who is their child will turn out to be successful in life.

What other ways? Grades and teacher evaluation of children. Many colleges, a constantly increasing number, have dropped any use of SAT or ACT in admissions and rely on grades. They have found that grades are a far better predictor of success than standardized tests. This is a REAL WORLD example and they have made this choice based on observing what happens. 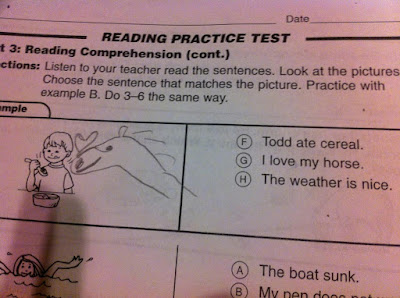 From Flickr: "When my son takes standardized tests"
Posted by Oregon Save Our Schools at 9:26 PM No comments: