Data Driven or Opt Out?

New school board members on the horizon – will they know enough to combat the testing mania? We haven’t heard from any of the present board members on testing, except Paul Anthony. Certainly there are huge, huge reasons to work against the Smarter Balanced testing which Oregon has each of its schools use. The largest of which is it actually harms some children, while not directly helping any child’s education.

A sensible response to this would be to de-emphasize the testing. Figure out ways to make it less intrusive, less damaging, less important. There are lots of things that could be done, small nuances of showing its underlying lack of importance. But instead of choosing what is most often best for children our administration and board have increased the testing’s importance by advocating for becoming a data driven district and sending out blatantly absurd missives which tell how important it is to score well and to combat things which might reduce our scores, like opting out.

One of the reasons for a district to take this tact is a misunderstanding of what opting out is working to accomplish – a more useful system of testing which gives a snapshot of how children and the district are doing without the mind numbing pressure, the zip code controlled failure, the anti-child curricular effects, the massive waste of time and resources.

Opting out is saying we can do better by our children, while our district is saying we don’t care, this is how the game is played, to hell with your child.

You choose, do they really think this, or are they just following along because it is simpler? If we are to be a data driven district then why aren’t we opting for something with good and useful data? We are all in this for children, right? Then why are we so willing to do things that harm them in the name of them?

We are destroying the village in order to save it. 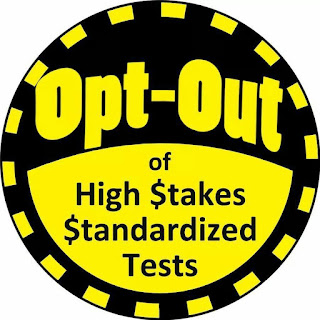 Posted by Oregon Save Our Schools at 5:41 PM No comments: