[our flyer why English learners and high-stakes testing doesn't work]

The Common Core State Standards package is the linchpin of a mechanism to sell policies, high-stakes tests such as Oregon’s Smarter Balanced Assessment, confidential student data, and other practices that pose immediate harm for a whole generation of our children, public education, and democracy. We need to stop the Common Core from doing more damage.

Do not be fooled. The Common Core State Standards (CCSS) package is sold falsely as a “state” effort to achieve equal educational opportunities and assure that all U.S. students can compete globally. In reality, the CCSS package nationally centralizes education policy to serve the interests of an elite group of rich and powerful people. The CCSS sales effort threatens the real source of success and innovation in the U.S. - a decentralized system of school governance responsive to local needs and priorities.

Oregon Save Our Schools supports local and state standards to guide teaching. The CCSS package is part of a national campaign to privatize school management, de-professionalize teaching, turn learning into a sales commodity, and limit our schools to producing workers instead of informed citizens. Ways the CCSS package is built on misinformation:


Oregon Save Our Schools calls for a moratorium on CCSS implementation, and urges fellow citizens to act to put the public back in public education. 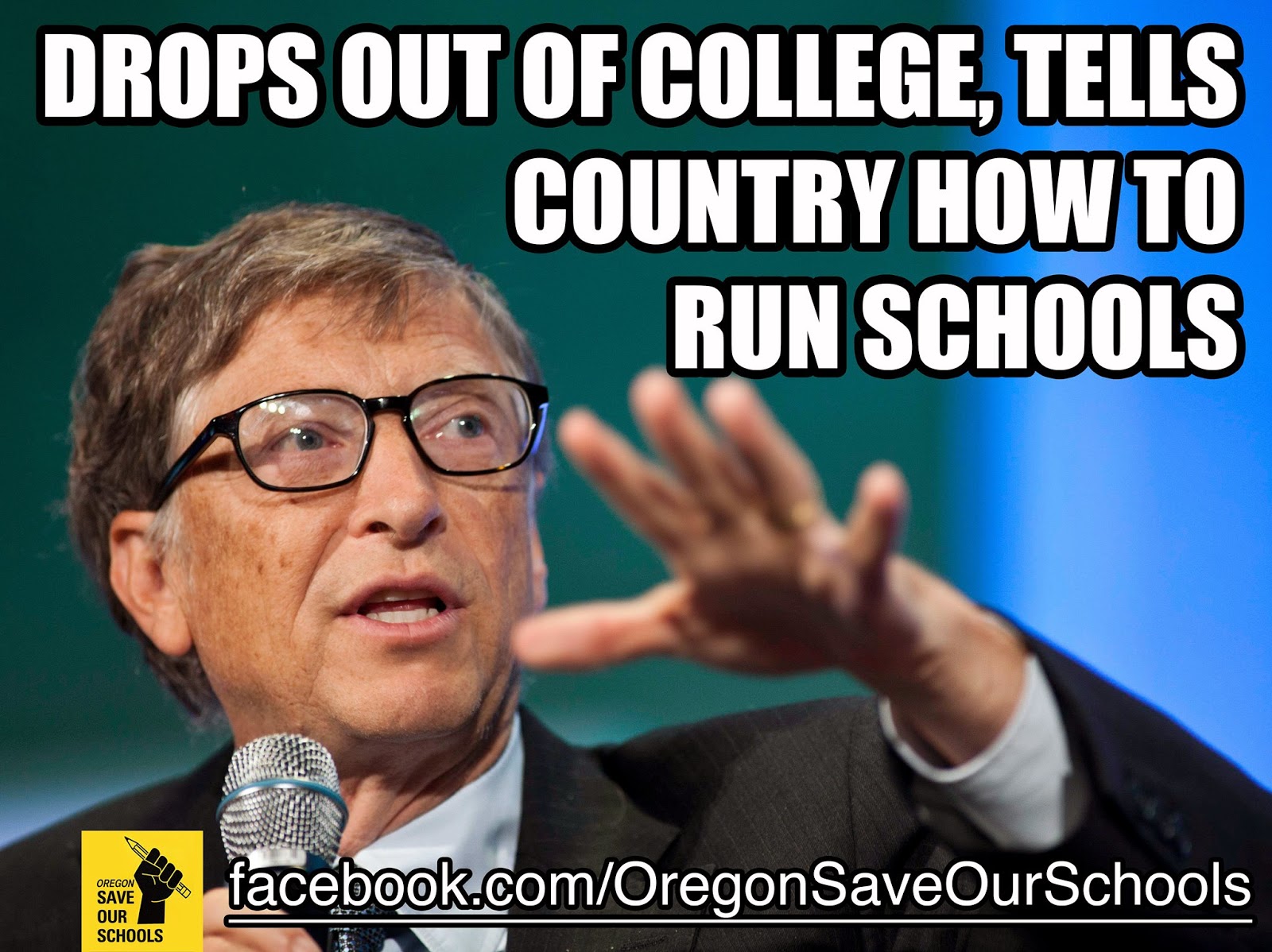 Joint statement by Early Childhood Health and Education Professionals: "Why We Object to the K-3 Core Standards".

"How Bill Gates Pulled Off the Swift Common Core Revolution".

Why the CCSS are not good for our younger students by Valerie Strauss:  "6 Reasons to Reject Common Core K-3 Standards--and 6 rules to Guide Policy".

Anthony Cody has written several articles as of late that reviews concerns about Common Core State Standards: "The Year the Common Core Began to Unravel".

An excellent article  by Rethinking Schools that gets to the heart as to why CCSS are taking our public education in the wrong direction, much like NCLB.

Concerns by Susan Ohanian about who really benefits from the SBAC (Smarter Balanced tests for Common Core Assessment) and has samples of the test to evaluate.

A New York principal expresses concerns: "I was Naive About Common Core".

More reasons from a principal to be concerned with Common Core: "A Storm of Reform, Principal Details Damage Done".

Diane Ravitch comes out to NOT support Common Core. There are a great list of reasons why from how it affects teaching to how it actually came to be adopted in a non-democratic manner. Also check out this article by Diane Ravitch: "The politics of the Common Core are interesting indeed. And they will become even more interesting in the next few years as states are required to come up with the money for implementation, new technology, new materials, and professional development."

Eight Problems With Common Core Standards, Marion Brady, a longtime educator and administrator, lists reasons why we should be concerned with the CCSS.

Dr. Yong Zhao, in Five Questions to Ask About the Common Core, also notes why we should be concerned about Common Core State Standards.

Linday Burke of the Heritage Foundation writes Feb. 18th in "National Education Standards and Tests: Big Expense, Little Value" about how local control is a concern as well as expensive to implement.

In this article by Joanne Yatvin, "Choking on the Common Core Standards". Joanne outlines problems with the Common Core Standards. Joanne is a longtime public school educator, author and past president of the National Council of Teachers of English, and a member of Oregon Save Our Schools. She teaches part-time at Portland State University and is writing a book on good teaching in high poverty schools.